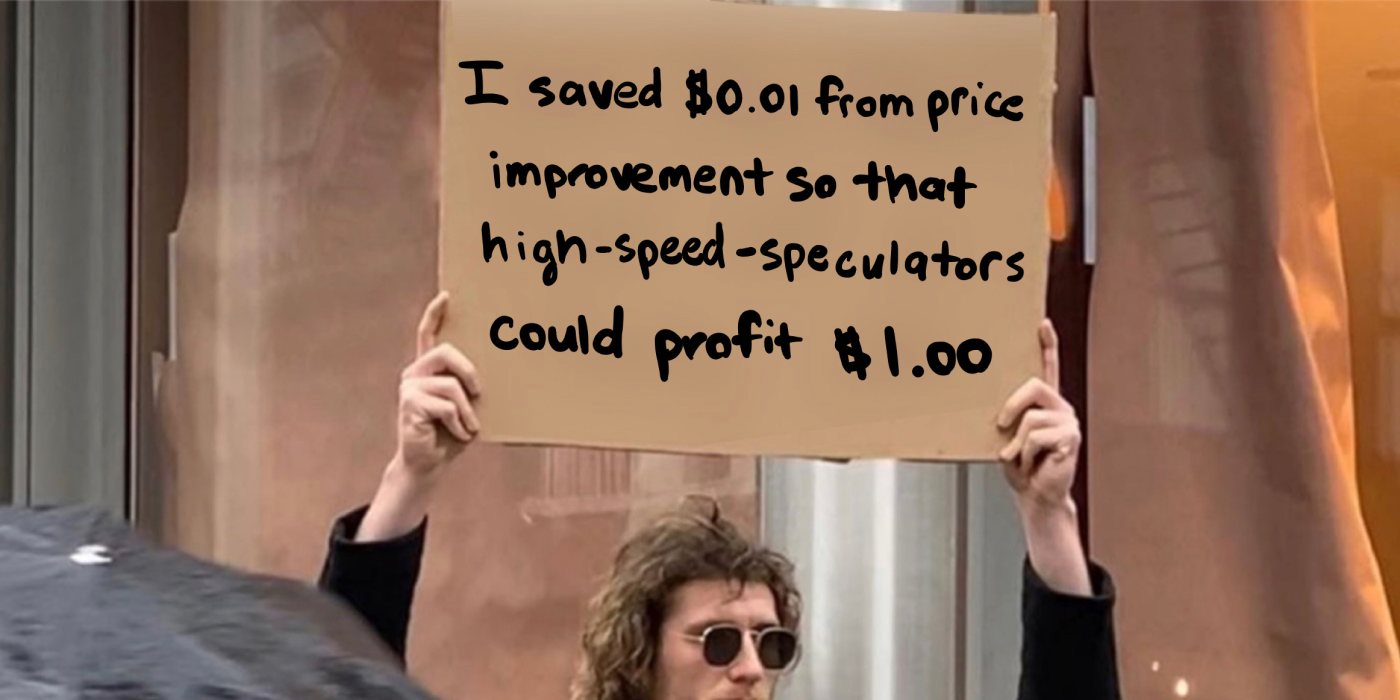 How's that price improvement working out for you?

2021 was quite the year in markets and market structure. A wave of interest and new investors has swept through, in large part thanks to the access that modern trading systems can provide to retail investors. However, that free access to trading has a dark side. Much like “free” social media applications, if you’re not paying for the product, then you are the product. While it’s true broadly, it’s especially true on Wall St that there’s no such thing as a free lunch.

So how much does a free trade cost you? Have you ever thought about it? There are multiple ways that you are a product for a broker offering free trading:

But wait, you’ll hear the broker say, there’s more! They don’t only offer free trading - no, they receive PRICE IMPROVEMENT from the wholesaler/internalizer that they’re selling your orders to. Not only are you getting something for free, you’re actually getting paid!

For those that don’t know, price improvement is a way of measuring how much better your trade price is than the NBBO (the National Best Bid and Offer - the best displayed prices available on stock exchanges). Retail investors generally place market orders (and cross the spread, buying at the offer or selling at the bid), and so if you buy for a price less than the bid, you have received a benefit called price improvement.

Price improvement is the most often cited statistic to defend this entire system - both the percent of orders executed at or better than the NBBO and the amount (in dollars) of price improvement received. For example, Virtu’s CEO claimed that their price improvement stats were “game set match” on the conversation. This generosity from wholesalers/internalizers clearly knows no bounds, right?

So how much price improvement are retail investors receiving? If you look at the stats from the wholesalers or discount/free brokers, you’d think it’s a large number, in the billions of dollars. However, there are some serious flaws with this kind of analysis.

First, this analysis is measured based on the NBBO. But because of the extreme level of off-exchange trading that results from the very practice of internalization/PFOF, the NBBO is artificially wider - by some estimates by 25% or more. It’s like marking up a TV by 25%, and then giving your customers 1% off and telling them they’re saving a ton of money. For example, both Robinhood and Etrade (and other discount/free brokers) tout their ability to execute at or better than the NBBO. But they know that the very act of selling order flow to internalizers damages and widens the NBBO.

Second, just because an execution took place at the “apparent” NBBO, doesn’t mean there wasn’t a much better price out there, or that the price would “soon” be better (with “soon” in this context being measured in microseconds or milliseconds). A quick word on the NBBO - the official NBBO excludes a lot of off-exchange liquidity (e.g., midpoint ATS, retail-specific facilities at exchanges) and odd lot (<100 shares) liquidity. This has a material impact on any metric and the brokers/high-speed speculators know this. This limitation makes all of the price improvement statistics look much better than they are in reality.

On top of that, thanks to the complexity, fragmentation and speed of markets, for many trades the practice of wholesaling and internalization looks very much like front-running. Here is a record of two trades in AMC that a friend sent me:

He was curious about how his trades were being executed, so he used an unusual quantity - 97 shares. With the NBBO at 36.48x36.49, his buy order executed at $36.4892, receiving a huge 8 mils of price improvement (or a $0.0776 benefit to his trade). But then, 100 milliseconds later, another trade printed on the tape, for the exact same quantity, at $36.4811. You can look at this a couple of ways (in one way, the high-speed intermediary pockets 189 mils relative to the newly widened offer), but the way I see it is that the counterparty to the original trade likely knew that there was a seller out there ready to sell at the bid, so they stepped in the middle. Instead of both the buyer and seller transacting 97 shares at the midpoint (the best possible outcome for both traders), each of them got a few cents of price improvement, and the high-speed speculator that sat in the middle pocketed a riskless (or nearly so) 81 mils (or $0.81 - an order of magnitude more than the price improvement received). It shouldn’t be surprising that the middle man in this trade was Citadel (my friend showed me the trade confirm), but this analysis would apply to high-speed intermediaries/speculators in general.

But wait Dave, this is an isolated example, right? How representative is it, really? Well it’s hard to say, of course, that would require extensive statistical analysis. However, we DO know that Public.com’s customers get executions far closer to the midpoint than Robinhood based on Public’s report in December 2021. Public doesn’t accept payment for order flow, and they have routing that’s more sophisticated than “send to Virtu or Citadel.” Public also cites a Bloomberg research report that shows most retail investors get very little of the spread between the near price and the midpoint, with 49% going to high-speed speculators (who call themselves market makers) and only 38% going to retail. Based on Public’s data and statements, it’s clear that they are finding a lot of liquidity inside the NBBO, specifically at the midpoint. So the example above fits well within these parameters in terms of average spread capture, and the idea that the trade above could have taken place at the midpoint is not far-fetched.

Third, while price improvement as a concept is flawed (it’s measured against a benchmark that it directly impacts), and exploited to show consistent, albeit small gains to retail while high-speed speculators rake in huge profits, even by that flawed benchmark the amount of price improvement being received by retail investors is de-minimis.

One way to examine this is to look at the record of all quotes and trades in the market (aka the SIP market data feeds). We can identify a subset of retail trades on this feed by looking at trades that take place off-exchange, at a price point inside the NBBO. So as an example, let’s say that the market for a stock is $10.00 x $10.01, and we see a trade at $10.0001. It is most likely that this trade was a retail sell order that was “price improved” by 1 mil ($0.0001) per share, or by 1 penny for a 100 share order. 1 mil is the smallest increment of price improvement that can be offered.

While this is obviously just a proxy for identifying retail trades, something glaring really jumps out - 15% - 20% of all sub-penny off-exchange trades receive 1 mil of price improvement, regardless of the spread. There’s another phenomenon in the data that shows a preference for 10 mils of price improvement as well, which suggests some static settings that are not optimizing for execution quality dynamically.

This is a big deal. Why is it such a big deal? It appears to be direct evidence of brokers gaming execution quality statistics.

It allows brokers to claim that a high percentage of their customer orders receive price improvement, despite that price improvement being de minimis. It is also a big deal because every one of those trades that received a mil of price improvement damages the NBBO by being routed and executed off-exchange, widening spreads for the entire market, for no material benefit to anybody except the broker and market maker. Every single one of those orders should have been routed to a lit exchange, to be competed over by hundreds of firms. There is no doubt that 605 reports show average price improvement to be more than 1 mil, and this analysis will miss some retail trades. But that doesn't explain why so many trades are taking place at the bare minimum increment.

Take a look at the 2c spread bucket for example. If you add up the share of trades up to 10 mils, you get over 34% of all trades receiving 10 mils of price improvement or less. But the spread is 2c wide! You have 100 mils between the best price and the midpoint. Why aren’t retail investors getting more of that spread? Because of market complexity, fragmentation, conflicts of interest and corporate concentration of power in a small number of high-speed speculators.

What does all of this tell us? It tells us that we should “ban payment for order flow. This practice distorts order routing decisions, is anti-competitive, and creates an obvious and substantial conflict-of-interest between broker dealers and their customers. Broker-dealers accepting payment for order flow have a strong incentive to route orders based on the amount of order flow payments, which benefit these broker-dealers, rather than on the basis of execution quality, which benefits their customers. Furthermore, the parties making such payments … are forced to find other ways to recoup the amounts of such payments, whether through wider spreads” … oh sorry, I just randomly found myself directly quoting a comment letter from Citadel. But I agree with them - we need to do what they said - we need open competition for order flow. 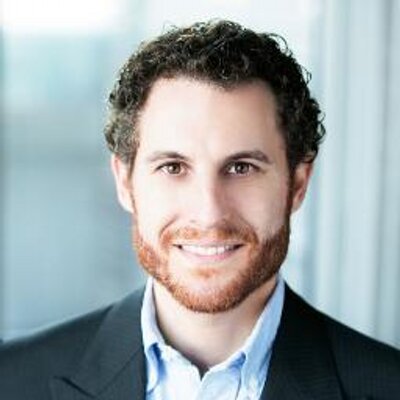 Dave Lauer is a co-founder and CEO of Urvin Finance, where he leads the team in building The Terminal. Prior to founding Urvin Finance, Dave spent over a decade advocating for financial market reform after quitting his job as a high-frequency-trader.

Joining will get you early access to the beta and other perks. Important to note - we'll never share your email with anybody!
Thank you! Your submission has been received!
Oops! Something went wrong while submitting the form.